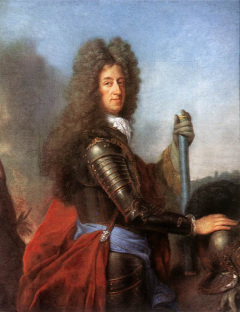 Maximilian II. Emanuel (1680-1726), Elector of Bavaria, is considered to be the creator of the standing Bavarian army. After assuming the regency in 1682 he had ordered the Reichsfreiherr Hannibal von Degenfeld, advanced general-fieldmarshall-lieutenant, to form up this army.

Already since 1683 Max Emanuel led his newly recruited regiments through the campaigns against the turcs (already since 1687 respectfully titulated “The Blue King” by his adversaries) and also during the War of the Spanish Succession until the the loss of the second battle of Blenheim/ Höchstaedt in 1704, after which he had to go into exile.

Anton Hoffmann (1863-1938) surely is the outstanding portraitist of the Bavarian army of that epoch. With the facsimile reproduction of this work of art, published in 1909, we offer you to subscribe to, he created an iconography of the Bavarian soldiers of the “Blue King” second to none.

“Nearly parallel to the great work of Müller-Braun (also available as a facsimile reprint by LTR publishing house Ulf –Joachim Friese – with an English and French translation of the extensive captions on the black-and-white- as well as the underlines of the full-colour-plates) Anton Hoffmann had set an apex to the works about costumes of the Bavarian Army painters”, Jürgen Kraus writes on page 74 of volume 5 of the Publications of the Bavarian Army Museum, published by Ernst Aigner, Ingolstadt, 1982: Bavarian Military Painters from Beich to Thöny.

Methodically and conceptually reclining to Adolph Menzels legendary work on the “Army of Frederic the Great”, also published as a complete facsimile of all three volumes in our Publishing house, Anton Hoffman presents a sequence of pen drawings of characteristic basic types, which are valid for all the regiments of a respective branch of service.

The measurements of the prints are consistent with his originals created on cardboard.

Anton Hoffmann had traced his soldiers in pen drawings, precise to the smallest detail, in very eventful and impressive poses as excercising, battle and skirmish scenes as well as handling their weapons – initially not planned to be coloured. Hoffmann restricted the necessary information of the colours on schemes on two full colour-plates in the supplement.

He was not able to revert – just like Menzel could – to a fullness of original garments or  pieces of equipment.

He based his illustrations on contemporary paintings, etchings, tapestry and his studies in sources and in the material in archives that are mostly lost today:

To every depiction Anton Hoffmann designates the respective source(s) in the accompanying text (German).

These 84 pages text pass us on plenty of detail information about the development of the Bavarian army from 1682 to 1726.

On two black-and-white plates Anton Hoffmann combined the depictings of a number of discovered original weapons and pieces of equipment.

Essentially Anton Hoffmann presents the typical appearance of the Bavarian soldiers about 1720.

Günter Koch coloured the black-and-white plates of an original copy of the work for his own collection in a very fine gouache style, that allows to identify Hoffmanns original lines of the depictions.

A work of full-page reproductions of all the 56 full colour- and 2 black-and white-plates in the original size of the respective motive (measurement of the depictions about 395 to 295 mm / about 15,5 to 11.6 inch) on large plates (420 x 297 mm / 16,5 to 11,7 inch) and 3 additional pages with black-and-white motifs and 7 pages each with a reproduction of a full-colour postcard with themes of the work.

Digitally printed on light white cardboard   b o u n d   i n   o n e   v o l u m e   together with the 84 pages of German text (table of contents, preface, information about the sources, survey of all Bavarian regiments and branches of service of the époque 1682 to 1726 in table form), printed on light beige coloured paper. Bound in coated light-blue linen with silver embossing and marborized book end paper.

THE ARMY OF THE BLUE KING

THE SOLDIERS OF THE ELECTOR MAX II. EMANUEL OF BAVARIA

DEPICTED IN „WORDS AND DEPICTIONS“

Reprint of the work in   f o l i o   s i z e   with 56 full-colour and 2 black-and-white reproductions and the 84 pages of text plus 3 additional pages each with a depiction of a soldier and 7 pages with full- colour reprints of originally separately published postcards depicting types of soldiers in this work ( size: 148 x 105 mm / 5,8 to 4,1 inch), hand-bound in light-blue linen (coated)