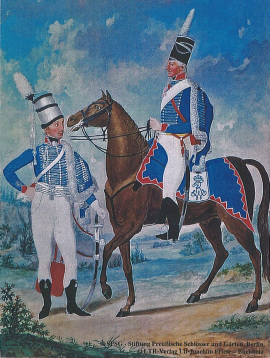 Now they have appeared in public for the first time!

Reanimated by the reproductions

of 94 of his coloured etchings / aquatints

kept in the Stiftung Schloesser und Gaerten Berlin-Brandenburg at Potsdam

Augmented by enlarged cuttings of 25 of his depictions of officers

kept in the Anne S. K. Brown Military Collection of the Brown University Library in Providence/Rhode Island/U.S.A. in an appendix

offered during the phase of subscription!)

G o t t l i e b   T.   D o e p l e r  (1762-1810), in Berlin and in Charlottenburg – at that time still an independent small town – living artist /pastellist, has created between 1803 and 1806 – surely for the King Friedrich Wilhelm III. himself – with these depictions of a trooper and an officer of each unit (for the cavalry and horse artillery the trooper is shown mounted), filigree coloured with gouache up to the smallest details as e. g. laces, braids, embroidery and frogging, a contemporaneous image of the Prussian army of that time, that until then – especially by its artistic presentation – had never been achieved by any other manuscript depicting the Prussian uniforms.

On each of his etchings and aquatints Doepler presents us the characters in front of  finely designed backgrounds (landscapes as well as buildings) and with them he has passed on to us the final occurrence of the Prussian soldiers in their rococo uniforms, their equipment, armament and the accoutrements of their horses.

Originally the particular folios (measurements of the picture: 273 x 385 mm - 107 x 151 inch) did not show any denomination of the depicted formation.

In the second half of the 19th century they were put behind large-sized mounts of cardboard (450 x 580 mm - 177 x 283 inch), on these „passe-partouts“ furnished with captions designed in calligraphy (denomination and number of the unit according to the roll of 1806, location of the staff, date 1806 as well as a continuous pagination) and bound in three folio-leather covers.

94 coloured originals of the oeuvre, bound in the volumes II and III today are conserved in the New Palace at Potsdam.

Volume I  is still considered as lost until today.

This   u n i q u e   in former times kept in the Royal library in Berlin had endured the more than 200 years since its creation in a wonderful state of preservation.

But in the meantime a couple of folios are in an alarming condition that needs restoration, so that the two preserved volumes II and III are no longer open to the public since a couple of years and also will not be visible in the foreseeable future.

The editor of this rarity therefore is very grateful that the staff of the foundation palaces and gardens Berlin-Brandenburg (Stiftung Schlösser und Gärten Berlin-Brandenburg) now has given him the permission to replicate the 94 folios of the two volumes of this preciosity of military costume development on the basis of the slides - after their digitization - of very good photographs taken in the nineties of the last century he has at his disposal and to publish them as the first full-colour print of these works of art.

contains the folios „37“ to „83“ with the depiction of officers and troopers of the infantry regiments nos. 22 to 60 as well as of the 8 fusilier brigades, altogether 48 folios.

In the lost volume I therefore must have been bound 36 folios – that besides the title page showed the infantry regiments nos. 1 to 21 – the guards surely in different variations – as well as the general staff and the adjutancy.

The volume starts with 2 folios for the foot and mounted Jaeger-Corps, followed up by: The 13 cuirassier regiments (but the folio depicting the full dress of the regiment Garde du Corps (folio no. 100) is missing as well as the following missing depictions at least since 1906, the 14 dragoon regiments (again a „House regiment“ is missing, the dragoon regiment „Königin“ (folio no. 105)), the 10 hussar regiments plus the hussar battalion no. 11 (missing are the regiments nos. 2, 8 and the coloured folios of the regiment and battalion Towarczys. Of the latter a not coloured etching still is existing).

After that follow 5 folios depicting the artillery, Miners Corps and Field Engineers as well as 4 folios showing the Invalids, Cadets-Corps and Military Academy.

Below of every depiction we have inserted the mentioned underlines added on the passe-partouts in the 19th century.

The editor is very grateful to Peter Harrington, the curator of the Anne S. K. Brown Military Collection of the Brown University Library in Providence/Rhode Island/USA, who had given him already the information that there are kept 15 coloured etchings/aquatints of Gottlieb Doepler and had sent him large size photocopies of them and now has given the permission to reproduce these meanwhile digitised depictions in this volume:

6 ones present officers of the General Staff, the Adjutancy, Infantry Regiment No. 13 and the Guards Regiment No. 15 and give an idea of the lost volume I.

6 duplicates depict already presented protagonists within the 94 depictions – but arranged in different backgrounds.

Subscription is still valid until February 28, 2015

First full-colour printing (based on the digitized slides of colour photos) of the 94 original fully coloured etchings and aquatints created by the artist between 1803 and 1806.

Altogether 138 (!) instead of the announced

at the unchanged subscription price.

with gold embossing and marbled endpapers

Already published and available at: